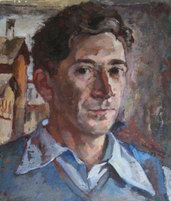 Oscar Van Young (born Joseph von Jung, but familiarly, and later legally, known as Oscar) was born in Vienna on 15 April 1906 (some records give the date as 1908, but it has generally been accepted as 1906). For business reasons his father found himself in Russia at the outbreak of the Revolution of 1917, and was followed there by his family. Oscar spent some of his teenage years in Odessa, Russia during the civil war that followed the Russian Revolution; his parents died of starvation there. The young man was taken under the wing of some influential American diplomats and sent to the United States under their sponsorship in the early 1920s, preceded there by his elder brother Julius, who had emigrated to the U.S. around the end of World War I. Julius later died while on an automobile trip to California with his family in about 1940, leaving a widow.

Coming to Chicago in the mid-1920s, Van Young worked as an errand boy, and then as a lithographer, a skill that emerged in some of his earliest artistic works.  He began to gain a reputation as an artist during the Depression years in Chicago. He was studying painting in a class taught by Sam Ostrowsky when he met the artist Loli Vann (née Lilian Finkelstein) in the early 1930s; they were married in 1935. In 1940 the couple moved to Los Angeles, where Loli was to work for many years as the editor of a journal published by the American Brotherhood for the Blind, and later as an executive secretary for the Labor Commissioner of the State of California. During the war years Oscar worked as a draughtsman for North American Aviation. Their son and only child, Eric, was born in 1946.

In Los Angeles, Oscar Van Young’s reputation as a painter grew to national levels. He showed paintings in important exhibitions, among them at the Corcoran Gallery in Washington, D.C., the Virginia Biennial, the Art Institute of Chicago, the Los Angeles County Museum of Art, and many other venues. He had numerous one-man shows throughout California, was represented in many museums and galleries internationally, and had works acquired by a number of prominent museums. He was listed for many years in Who’s Who in America, Who’s Who in the World, Who’s Who in American Art, and other works devoted to the biographies of prominent figures in the arts and other endeavors, and was elected a member of the American Academy of Arts and Letters. For many years he taught privately, as well as at the Otis Art Institute, Pasadena City College, and California State University-Los Angeles. He became a visible and prominent figure in the Los Angeles arts scene during the period 1940-1980. A collection of his professional papers and those of his wife, Loli Vann, is held by the western section of the Smithsonian Institution’s Archives of American Art at the Huntington Library. Oscar Van Young died in Los Angeles on 26 February 1993, survived for some time by his wife of 57 years.